There is a lot to see in Canada and also in British Columbia. However, what impressed us the most was the Nature. We actually wanted to go for a afternoon walk in Myra-Bellevue park and ended spending another day hiking there. The first day we just walked around the Day Use Area. Where there are a lot of possibilities to hike. Most of the ways are loops and you can do them just with a couple of hours. There are also some possibilities to walk long distances and even to walk some ways which are not a loop. There is also possible to ride the paths with a mountain bike. The second day we went to the Myra Canyon Trestles. There ways there are longer and there is no possibility to walk a loop, so you have to walk back the same way you went there. 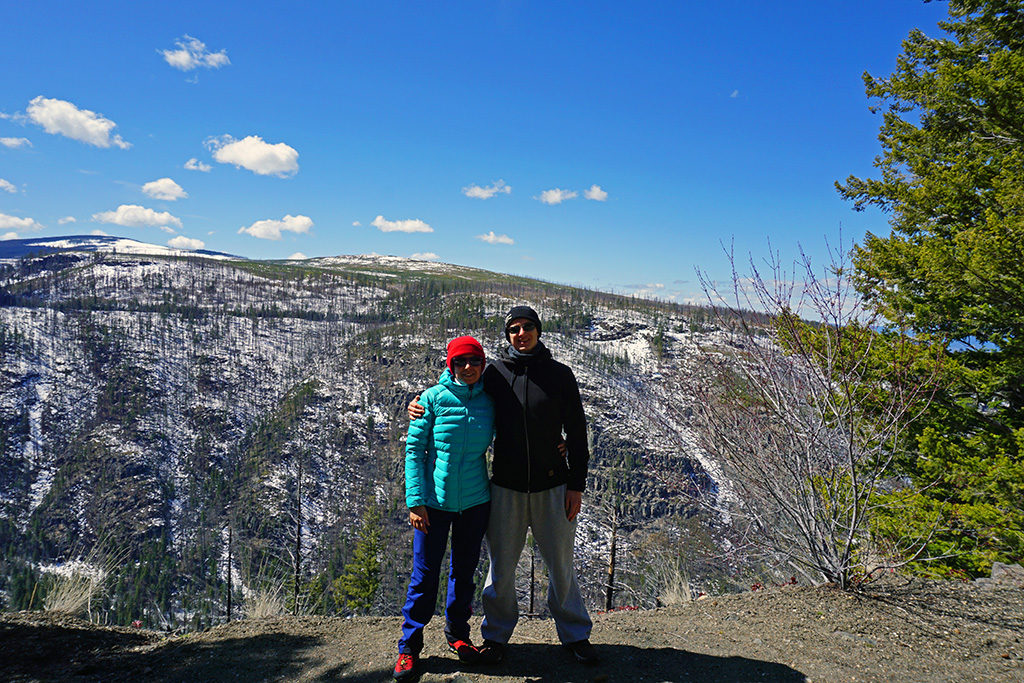 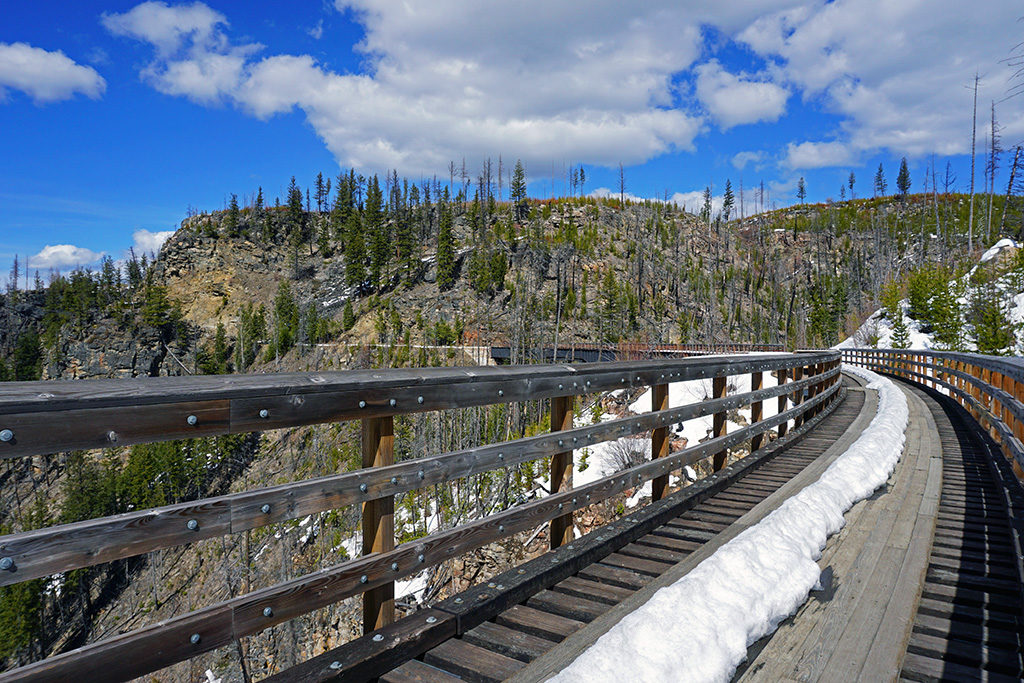 This park is near Kelowna and has different parking spaces in order to be able to visit different parts of the park. A huge area of this park was burned in 2003. After that the people who takes care about this park decided not to plant new trees. Instead, they decided to let the forest regenerate itself. That’s why if you go there you can see a young forest starting and some old and half burned old trees helping the young ones. The forests is still fighting to be as green and wonderful as it was. We found it an interesting phenomenon to see. You can realize how much time takes for a forest to regenerate by itself. It’s amazing to see the Nature fighting back, every cloud has a silver lining.

Maybe was because the forest was not so dense as others, that we were able to see more animals than other parks. We could even see deers just 5 meters away from us! We also saw some chipmunks, squirrels, mice and small birds. There is also a small loop way which has sings explaining the history of the forest and what to find in it. 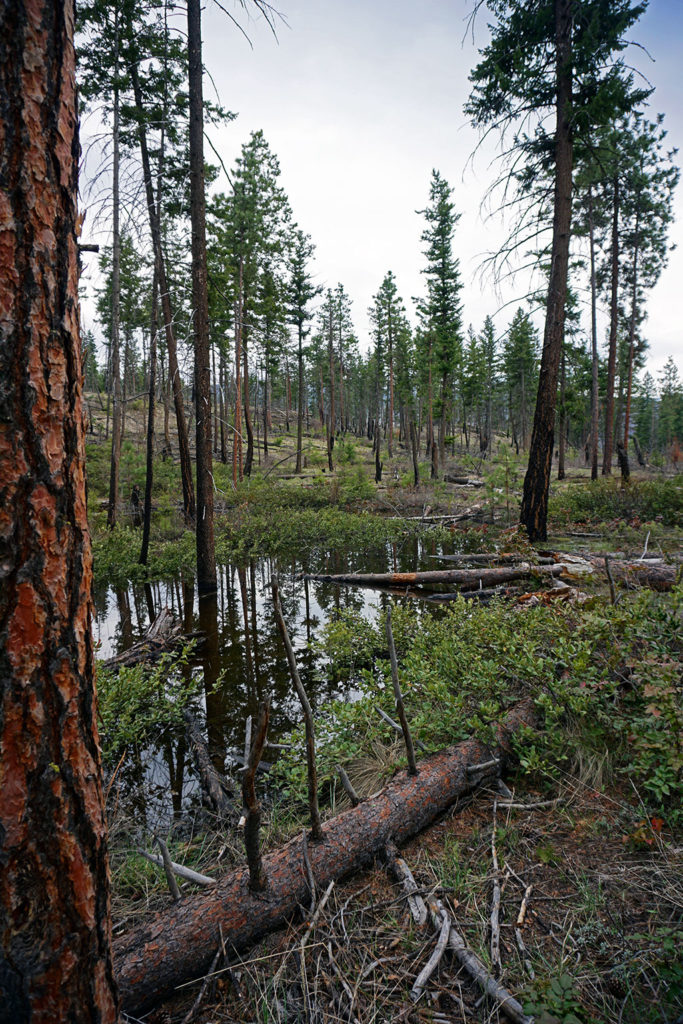 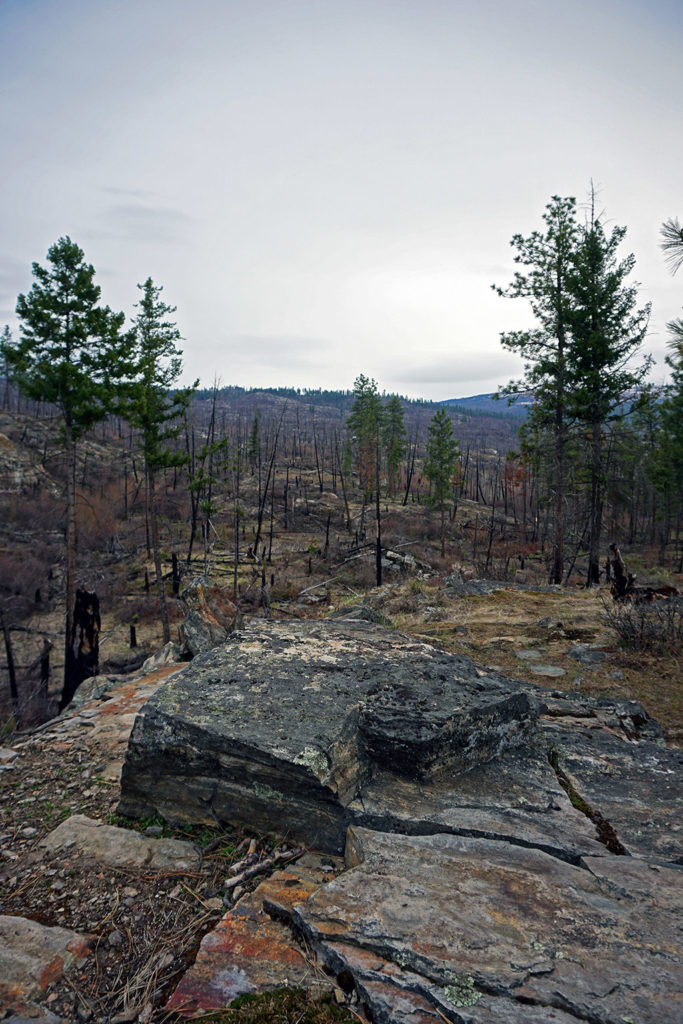 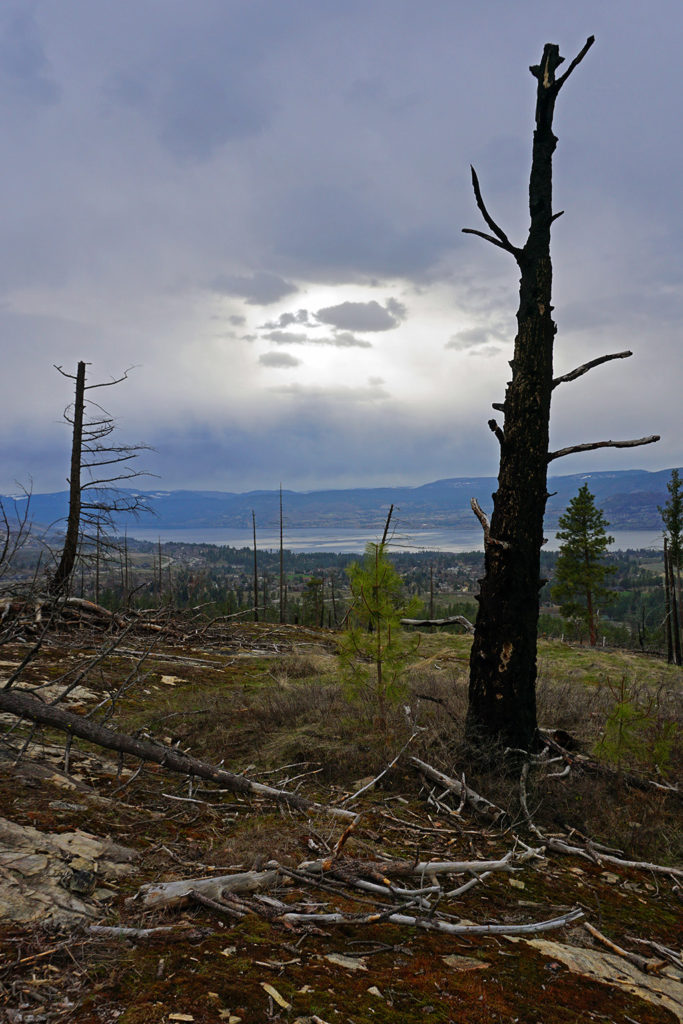 Please, we don’t want to get stuck!

After a day hiking in Myra-Bellevue park we were amazed from the views and we decided to go to the Myra Canyon Trestles to hike the next day. It was almost dark when we started to drive. On top of that the last part of the road was a windy gravel path until the top. The snow was melting and the path was full of water. The sound of the water was so loud, that we thought it was raining. With the headlight we were just able to see the gravel and the water rolling down, but it was difficult to see the way ahead us.

Geda was driving and was not amazed by the situation. She was scared the RV would at some point get stuck and we would not be able to go anywhere. We were also worried that the parking place was not open for the season and we had to drive the way back in the dark. After 15 minutes, that felt like 1 hour for Geda, we arrived at the parking place, and it was open! There was not too much space because of the snow. Most of the parking place was white an unable to access it with the RV. So we were not sure if we could go hiking the next day, but first we needed some food and some rest. 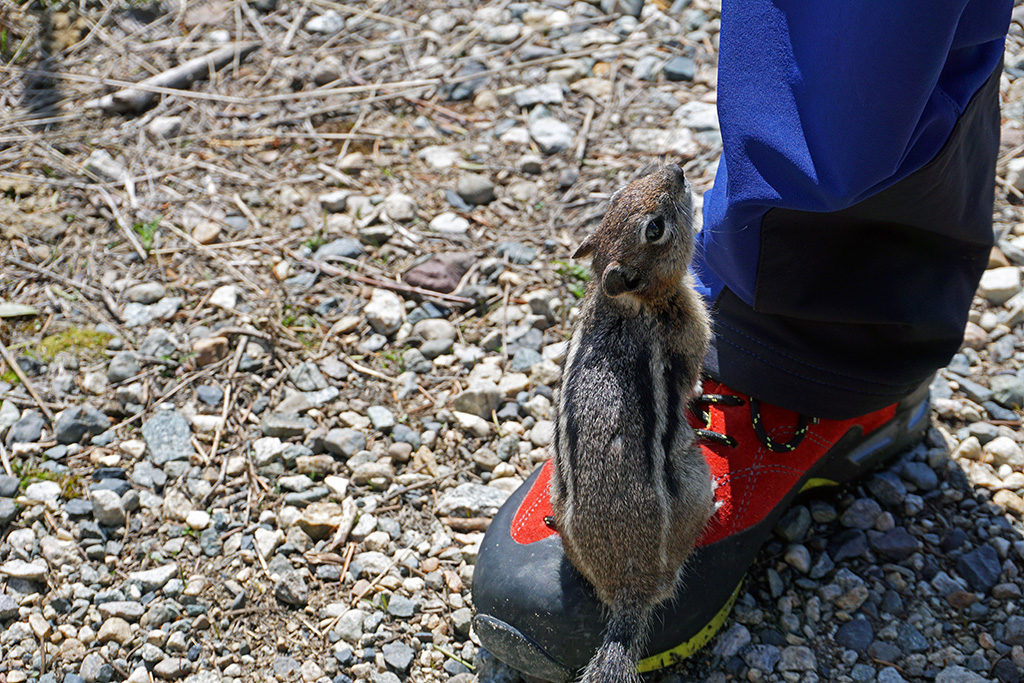 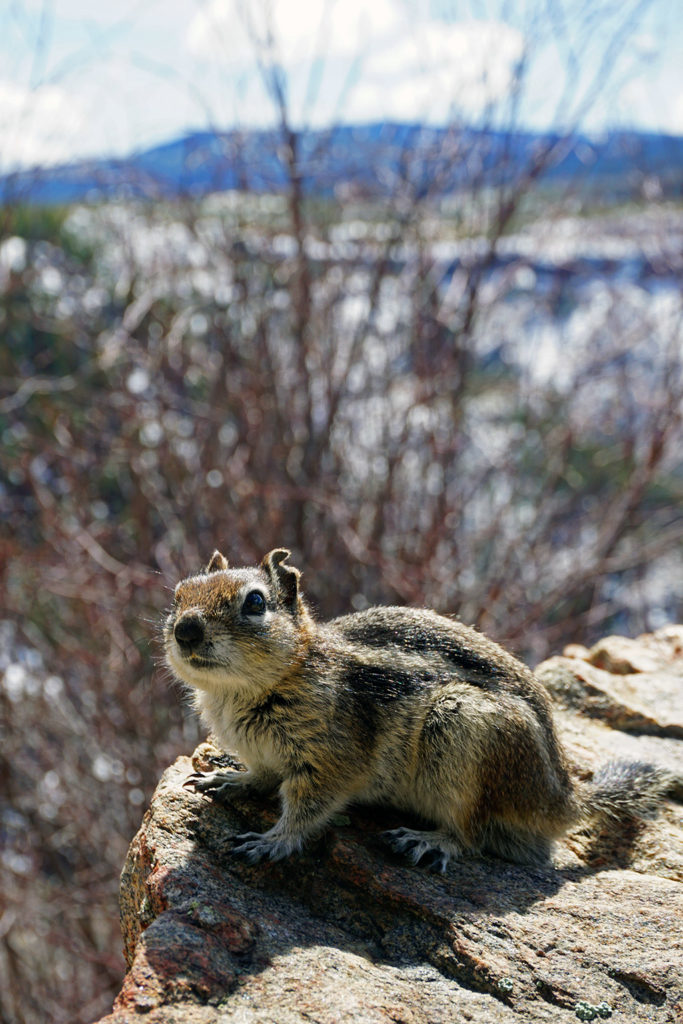 This path has great views of the Kelowna’s Valley. On top of that, there are tunnels and wood bridges. This path was originally built for the railway, at most for commercial purposes. Now there are no more trains going through it and is a great way to walk or even to ride a bike. The way goes from Hope until Castelgar. We just hike some part of it starting at Myra Canyon Trestles. There are stunning views through all the way. Most of them when you look to the Kelowna’s valley. The tunnels and the bridges just make the way much more attractive.

We didn’t could walk as long as we would. The snow was already present the whole way. We walked until the snow was so high that Lennart sank until the hips. At that point we decided it was clever just to turn around and go to the RV 🙂 Before walking back Geda walked the 5 meters to reach the toilets which was more funny for Lennart than for her. But she managed it and the toilets were really clean, and it even had toilet paper! Jackpot! This way is a famous one in BC and also is an easy hike level, so expect a lot of tourist when peak season. The way has also some signs which explains you the history of the region and the railway. If you are in the area you must go there! 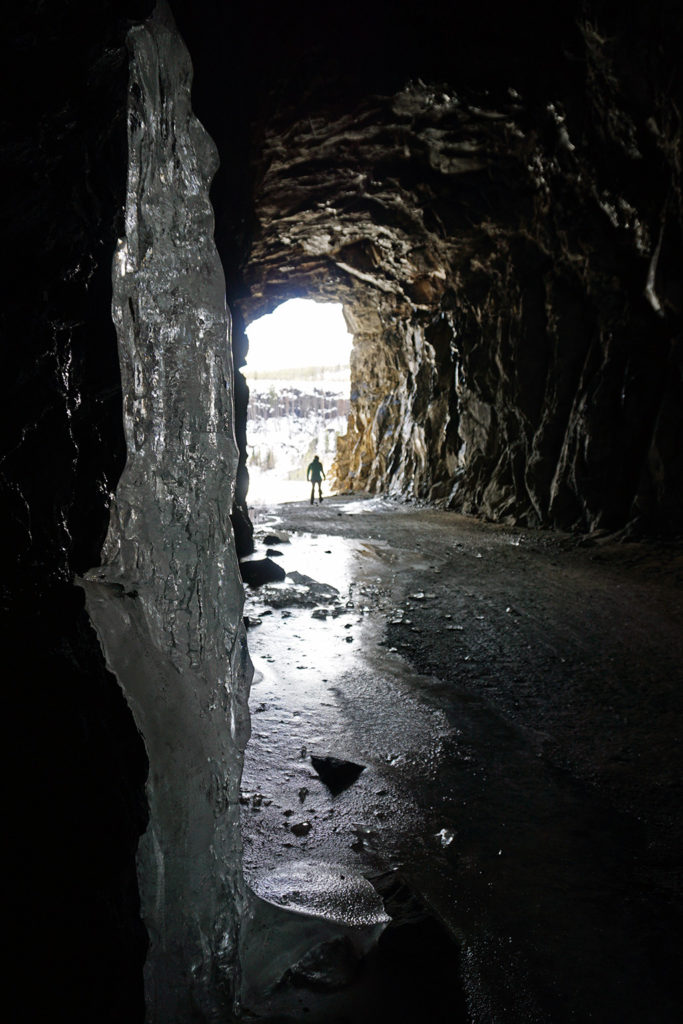 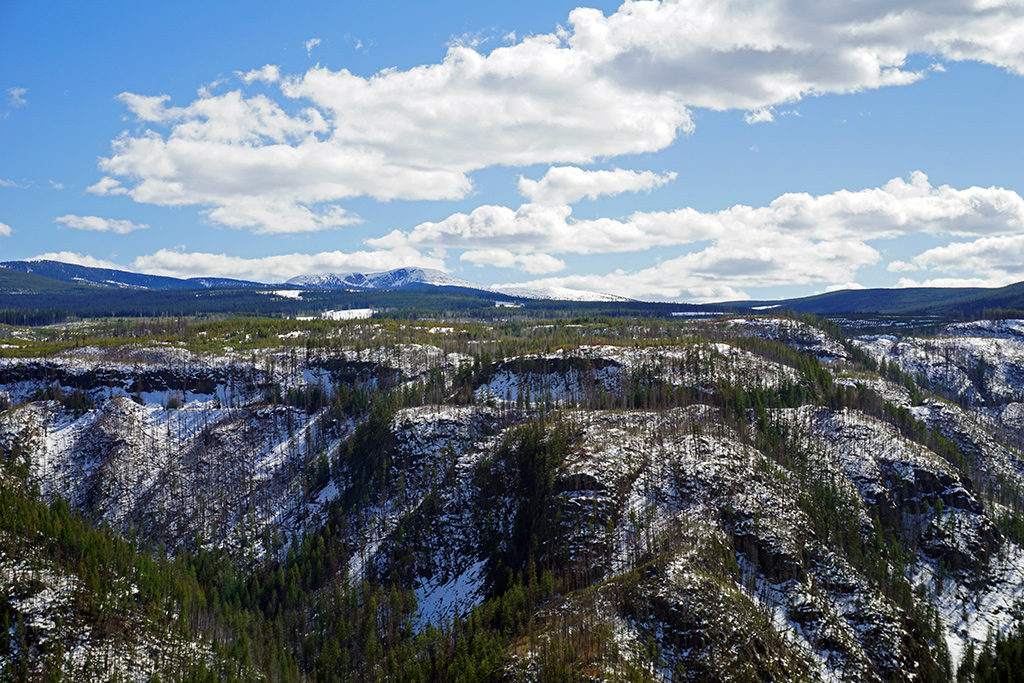 If you are planning to go hiking in BC we need to give you bad news… ticks are also a common inhabitant of the BC forests. We found several ticks walking around our bodies. Fortunately, they hadn’t attach to our body. After the third day of inspection and, sadly, finding them again, we decided to do something against it. The best way to avoid them is using a repellent against bugs. The most effective ones contain 10%-15% of DEET. Yes, this repellents contain toxic substances and it’s better if you don’t apply it direct on your skin.

The best way to protect you from ticks: put your pants into your socks (not the whole pants, just the lower part 😉 ), put your Tshirt into your pants. Then apply some repellent containing DEET on your shoes and socks. If you wish you can also spray it on your hips (where Tshirt and pants meet) and also on the clothes on your wrist. Most important part are the pants. You can also use this repellents to protect you against mosquitos. We know that is a really funny look, but sometimes happens when you are going to exercise outside. We are just happy that you can’t see our socks on the pictures 😉 If you know any other method, that actually works, please, let us know in the comments. We will be more than happy to try other possibilities! 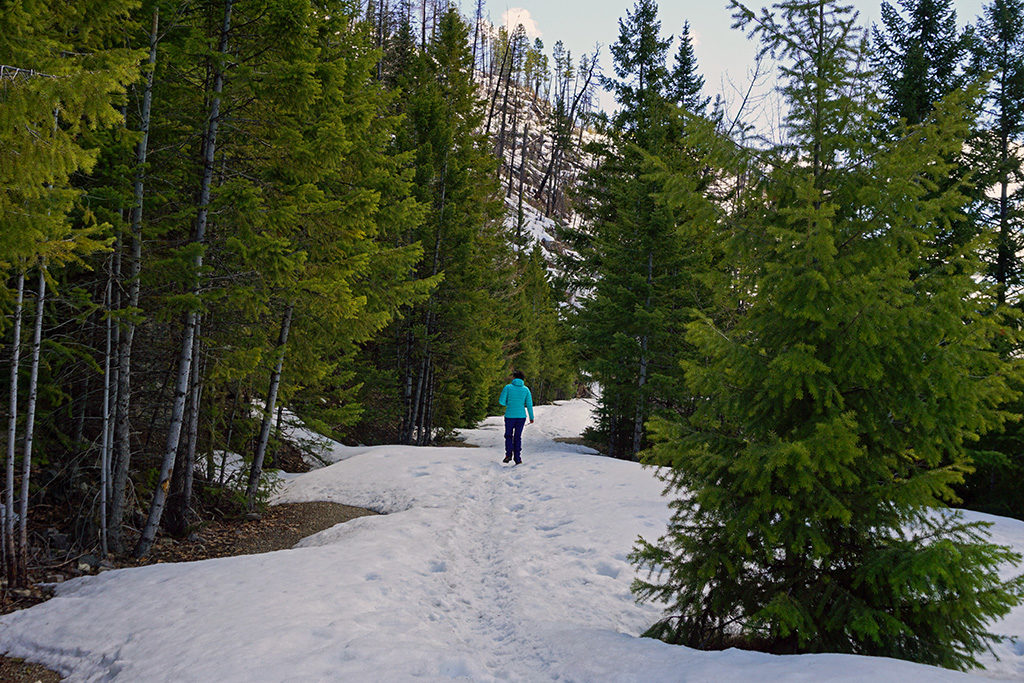 Our Top 10 tips when renting an RV