The nature from Canada captivate us from the first sight. After months of waiting and preparing our adventure we landed in Canada. After hard work and stressful days we embraced the green and the calm in Canada. It was really restorative to be surrounded just by nature. The big trees, the green and the wild animals just awake in us the feeling that we made the best choice once when we decided to go and discover the world. We were standing in front of the fantastic landscapes in British Columbia and we agreed that we felt in love with Canada’s nature.

Even places that had been burned for short time were fighting back to be green again. There you can really feel how big is the power of the nature and the wild. Most of our time in BC and Alberta the mountains were still covered by snow. And even that was beautiful. The vegetation there is amazing and it is also easy to reach. If you like to go hiking, BC and Alberta are the best places we know (even if we are sure, that there is so much more incredible places 😉 ).

We want to present you the Natural Parks we visited. We were so amazed that we can’t help recommending them… 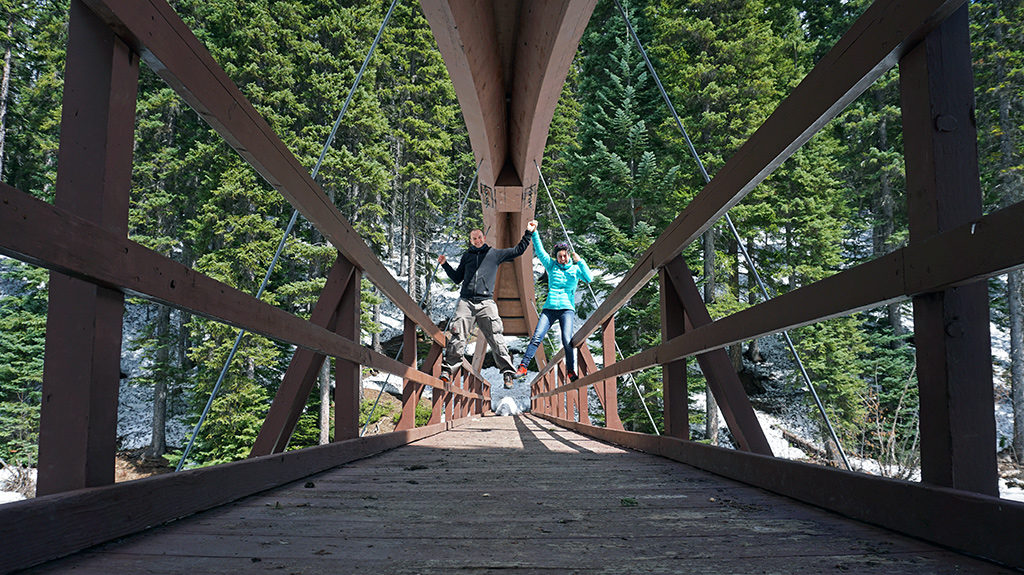 When we arrived in Banff it was dark and we were a little bit tired because of the driving. We decided that the next day we will just hike a small route and know more about the city. We went to the most visited mountain there, the Tunnel Mountain Trail. This mountain is the most visited because has great panorama views and the hike takes less than 2 hours (with going up and down). It took longer for us because there was some ice along the path and sometimes it was slippery. And also because we stop a lot to take pictures. But is a really easy way to have a great view from Banff and the mountains surrounding it. While drinking a coffee after the hike we also realized that there is one hour time difference between BC and Albert. It took us just one day to realize it, not bad! 😉 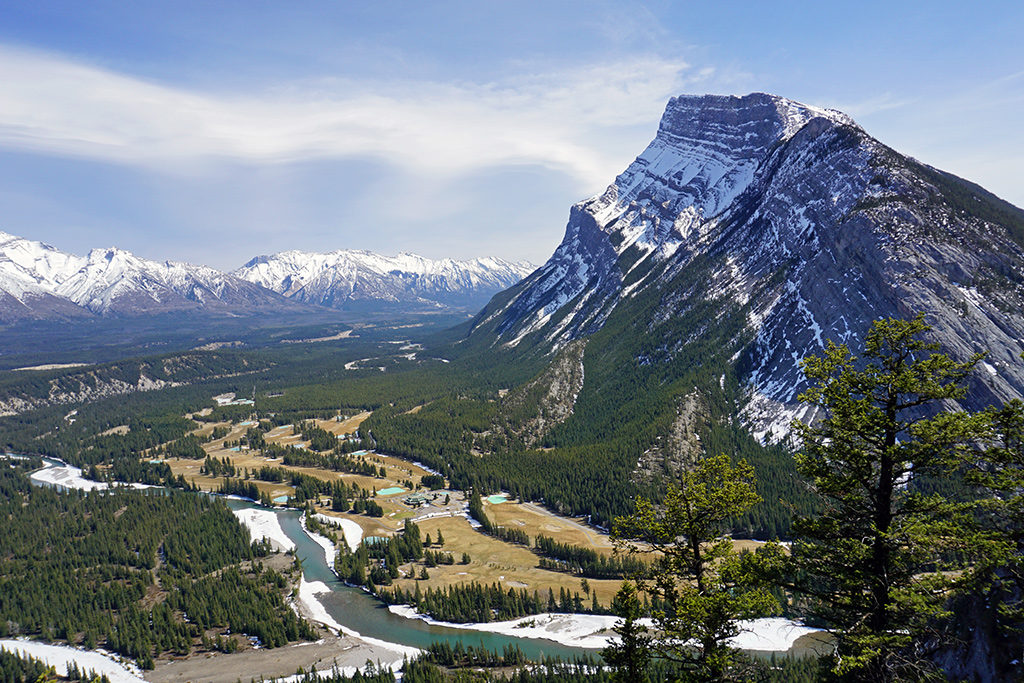 The next day we decided to go up until the top of Sulphur mountain. We must aware you that this pplace is also really touristic. Most of people go there because you can use a cable car to go up and down, so you do not have to lose your breath hiking. although it will cost you some money, 36CAD more or less. But we didn’t wanted it so easy and snow didn’t scared us! We went until the top of it hiking even the whole path was still covered in snow. We walked slowly because of the snow and it took us more than it should. Is not an easy fast way, so be prepare to exercise. But the views during the hiking and, especially, the views from the top are really worth it!

On the top there is a lot to see and walk around. There is even a an old Observatory you can visit. We were taking pictures everywhere. Really, the views there are so astonishing, there are no words to describe it. We realized that we didn’t have enough time to hike back. So, we needed to take the cable car, even if we wanted to avoid it. We couldn’t find the tickets office anywhere, so we ask…it was for free!! We felt really lucky! This free tour down with the cable car is just for people who hike the way up and except for peak season. But during the low season if you walk your way up, you can ride the way down for free! It made our day even better 🙂 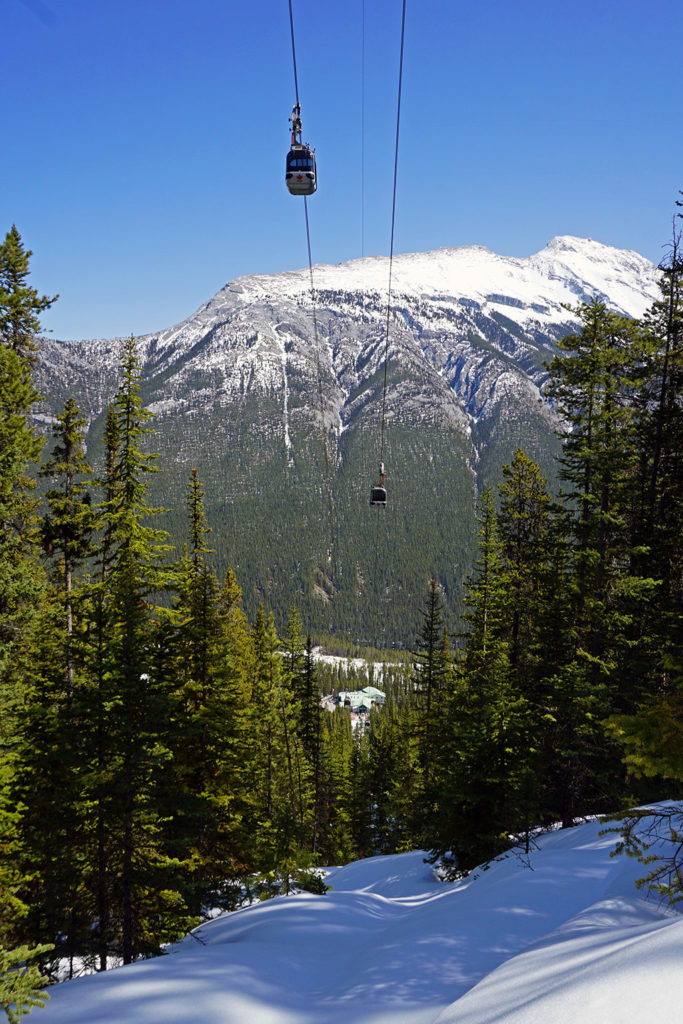 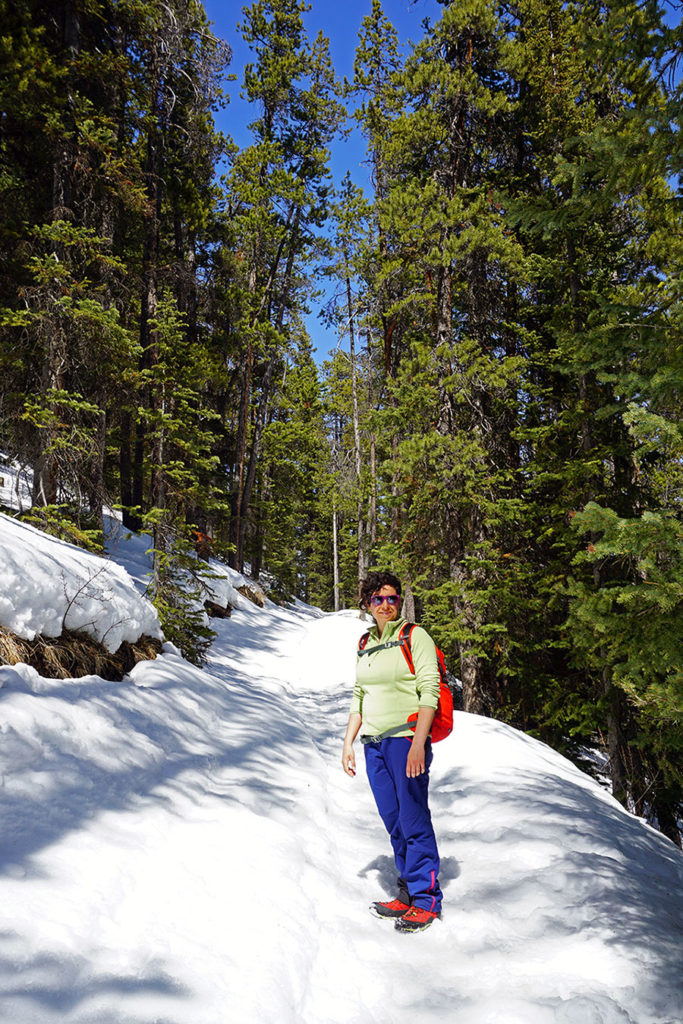 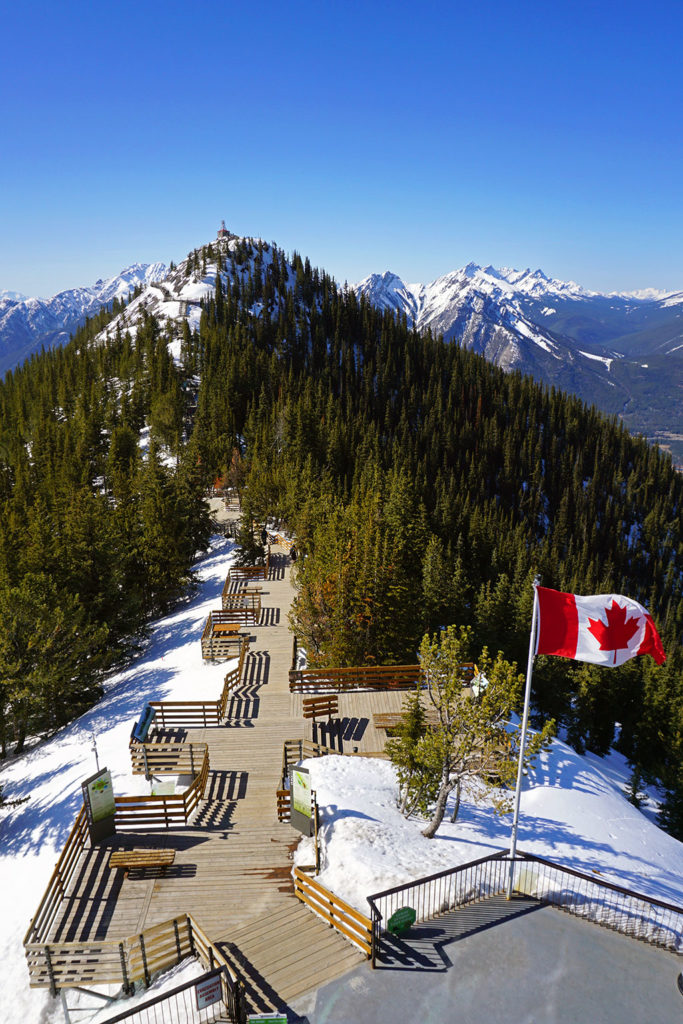 On the way back to Vancouver through the highway 3 we decided to stop on the Lighting lake park. Everything around there was still covered in snow, even the parking place was not completely usable. But we gave it a try and walk a loop around the lake. The lake was still frozen but the ice was no more so thick. At some points was no ice at all, but it was quite few. The snow as accompaning us the whole journey through Canada. We got used to it and didn’t bother us at all. We had enough warm clothes to feel comfortable.

The fascinating thing about hiking in places covered with snow is that everything is more quiet than usual. But in a strange way. Most of the time you have the feeling you are alone hiking because you can’t hear the other people. But, still, the small noises really near to you feel like really loud ones. It’s really peaceful to hike around with snow. The bad side that we already saw the sing informing us that there are bears in the area. So with every little sound we were thinking a bear is coming(well, or Geda though that at least). We laugh now about it. We haven’t seen any bear in Canada, even if we kind of regret it sometimes 😉 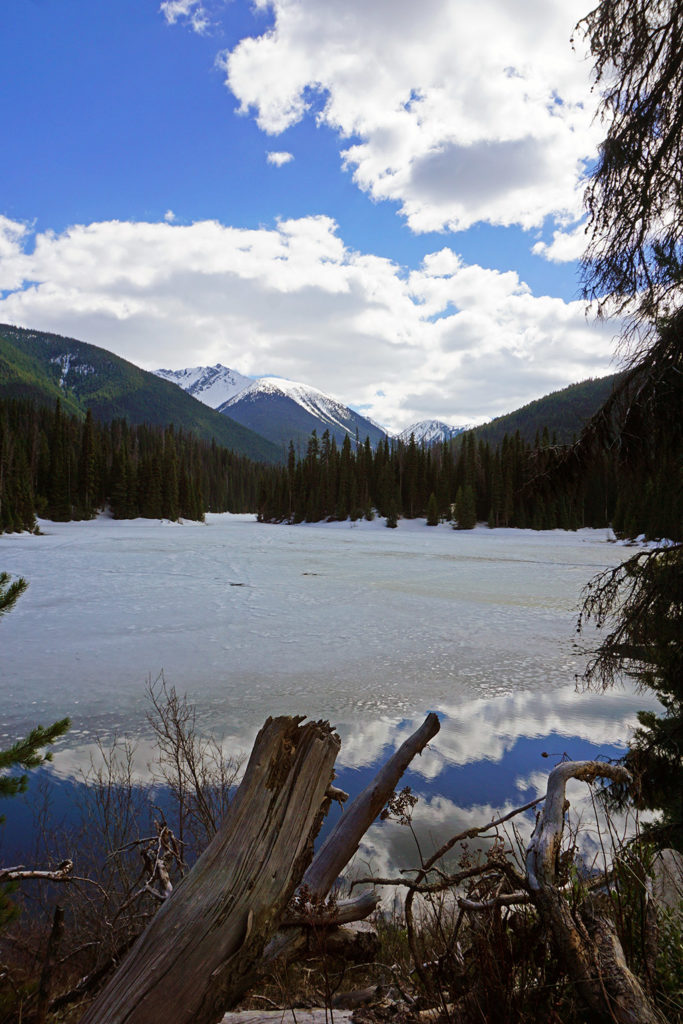 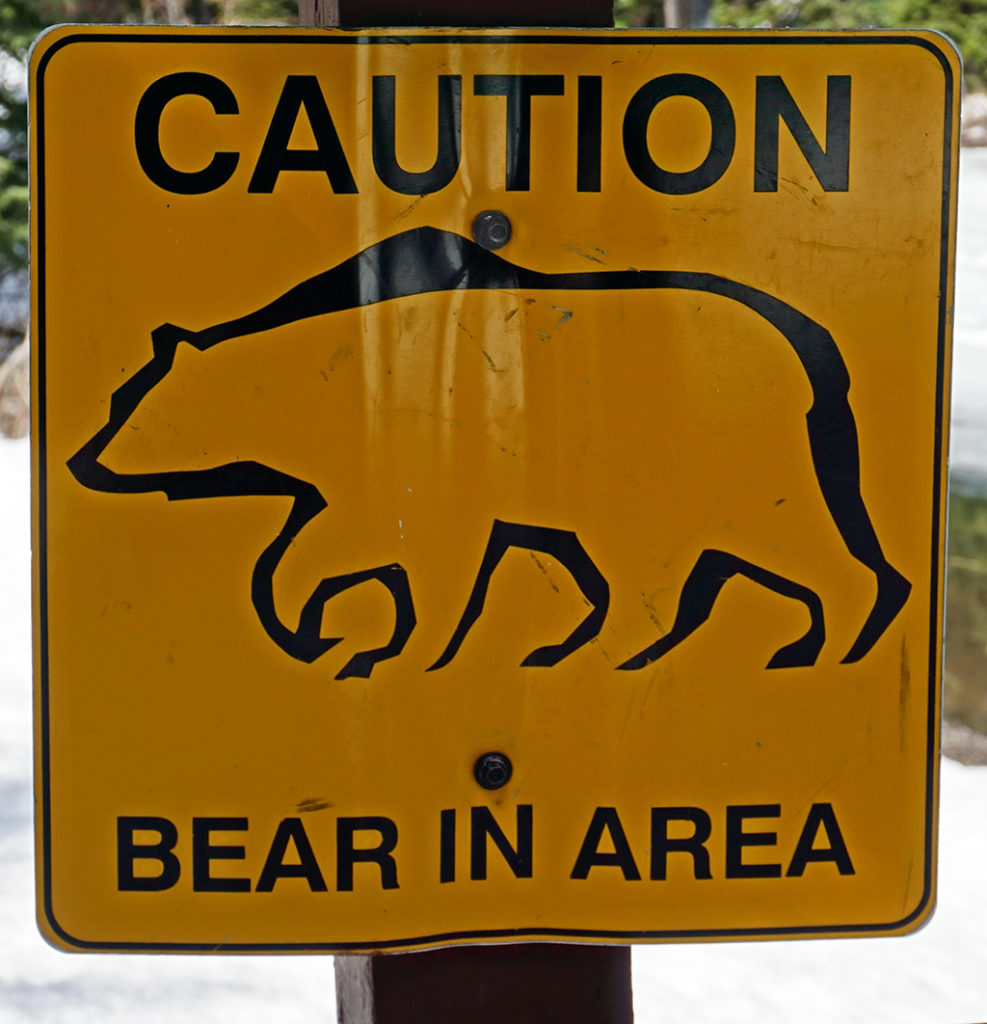 We slept in Hope in our way to Kelowna and Penticton an we pretended to sleep around there again the way back to Vancouver. The city has kind of a contradictory beauty. On one side the mountains surrounding the city are huge and the views are amazing. On the other hand, the city has not much to offer. We went for a walk after dark and it felt like a ghost city. The next day we found a beautiful lake at the end of the city. It was recommended not to go there for a swim because it will itch, it didn’t day why exactly. But there were showers outside, so we profit from it and have a proper shower while admiring the beautiful view.

The second time we tried to sleep around Hope we found some place in the mountains before entering the city. It seemed a perfect spot to overnight. We got out in order to check the place and the toilets. After 5 minutes outside, the wolves start howling and we realized that they were more or less 50 meters away from us. We could see more than one and we thought “we are in the middle of their territory!”. Maybe it was a little bit childish, but we decided to find somewhere else to overnight, we didn’t felt being in a safe place. A good sleep is always worth it 😉 The beautiful thing about that is that it was the first time for both of us that we could see wolves howling wild in the nature. They were communicating something that we were not able to understand. It was a breathtaking moment for us. We stood there, we embraced and watch them howling. 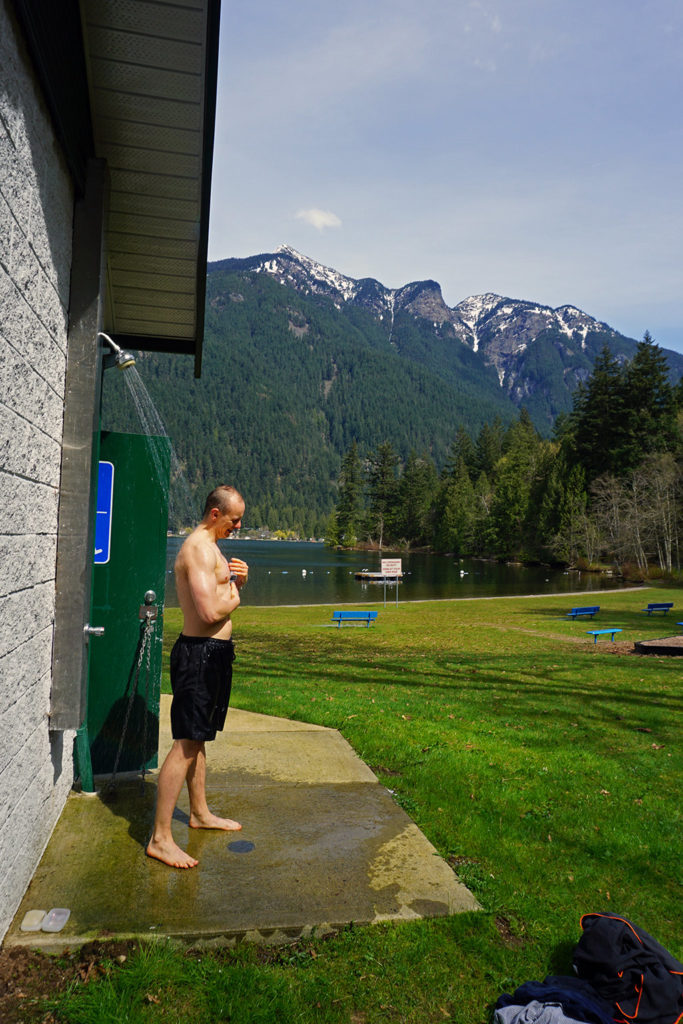 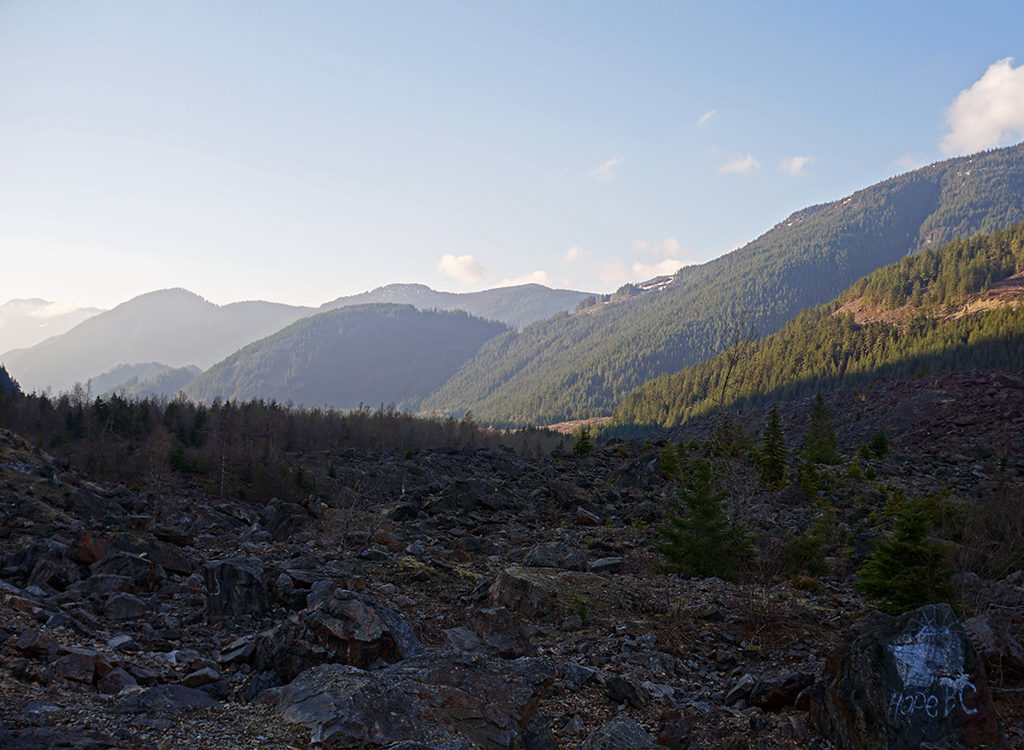 This amazing regional park just surprised us in the best of ways. We just wanted to go there for a walk and maybe sleep there. When we went off the RV we were fascinated from the nature and the animals living around there. Although the park is located really near on the highway, the views are incredible. The park has a big lake and also a small platform from where you can admire the animals living in the lake. It was impressive how many animals we were able to see: geese with their babies, beavers, turtles and different kind of birds that we were not able to identify. The park is quite small, especially the area you can walk. You can realize the effort of the people taking car of this regional park. And the effort is worth it, because you can see that animals and plants are feeling really comfortable living there. You can see the lake and behind of it the mountains growing high into the sky. That day, the clouds were playing with the top of the mountains and sometimes we couldn’t see them. It was a fantastic thing to admire. It was the best gift before going back to Vancouver to gave back the RV. 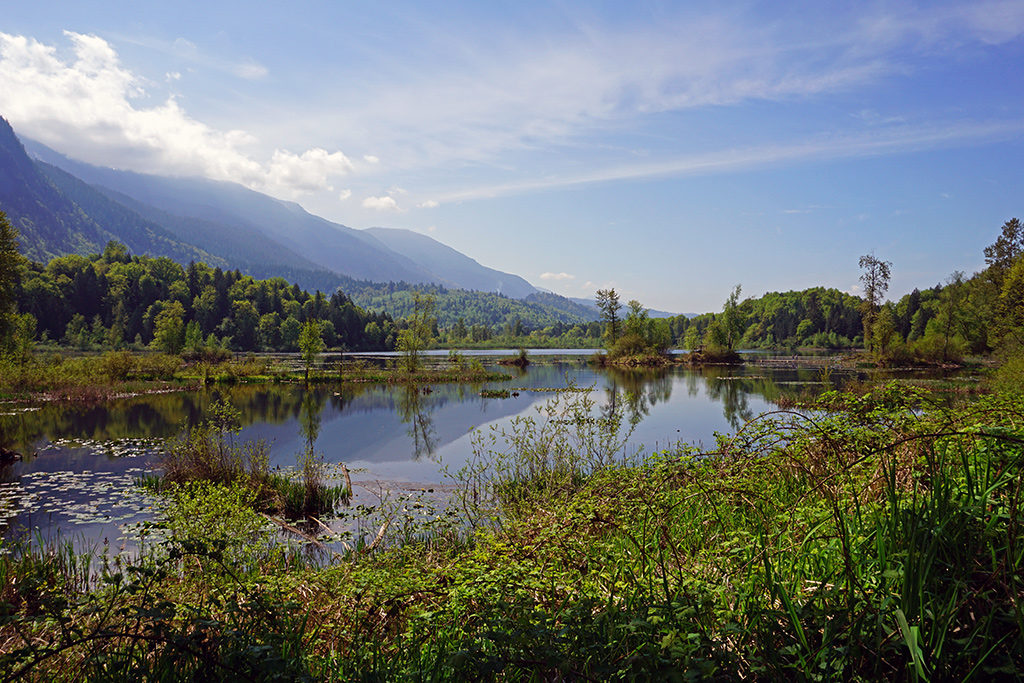