Our way through mainland in Canada was, actually, through British Columbia and Banff National Park. Canada is an enormous country and we, sadly, did not have enough time to travel everywhere. We had an intense relationship with BC, mainly because we were alone in our RV in the middle of the nature. It was clear from the beginning that our meeting with Alberta could not be so intense as with British Columbia but we wanted still to drove to the Banff Natural Park, even if that was for a really short time. We put together our route, some experiences and tips that you can use in your next trip to BC and Alberta. If you are more interested in our nature experiences in Canada you can read about it in this article: Love at first sight 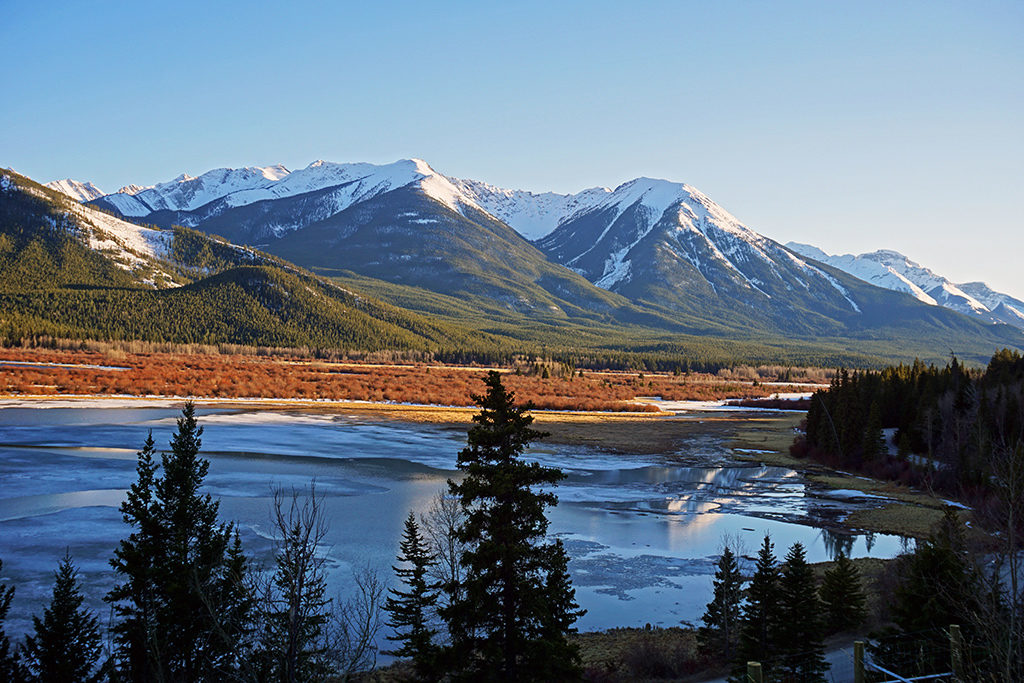 After leaving Vancouver Island we needed to decide the route we wanted to follow in order to visit BC. We decided to drove through the Highway 1 until Banff and came back through the Highway 3 to Vancouver. We actually, just diverge a little bit from the route in order to visit Penctinton and Kelowna. You will find on the road places to stop in order to buy groceries, rest or eat something. In British Columbia and Alberta is really easy to find somewhere to eat or drink a coffee while driving. The places are always pretty near of the road, so it will not take to much time also. For us was just a little bit surprising that we were only allowed to drive 110 km/h. And not all the time. We would say that the most of time you can drive 100 km/h and sometimes it is allowed to drive 110 km/h. 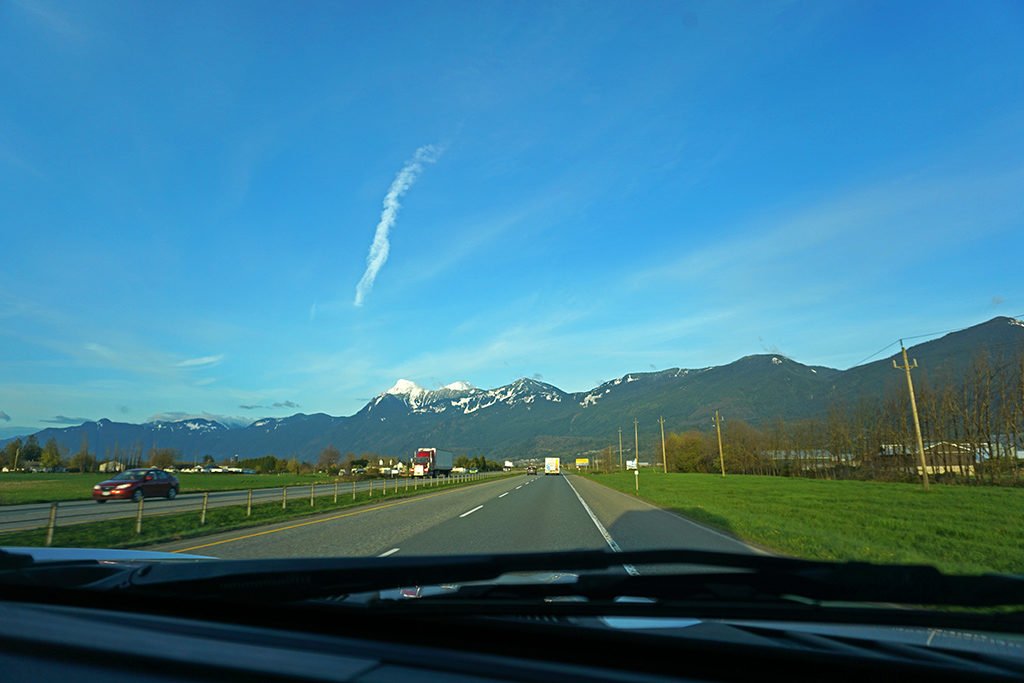 At first, we wanted to drove the Highway 1 but we decided to drive until Penticton and then go up to meet again the Highway. Penticton is a really beautiful place which has two shores. It remembered us a beach city, even if its shores are both in lakes. We were there in low season, so it was not much crowded when we were there. But we saw a lot of hotels and motels and restaurants, which kind of let us know that in peak season is a lot going on there.

We were having some difficulties to fine a place to sleep there without paying a parking lot in an RV park. We decided to fill our energy first and have some dinner. After cooking and eating we were much optimistic about finding a good place to sleep. Unfortunately, we were so focused to find a place that we led the water and the olive oil and some beers without putting them into a cupboard or a safe place. The result: we heard some loud noise, we stop in the first place we could, and yes, it was water and oil everywhere! Geda was really angry because it was the second time it happened after she cooked (but it was the last one! 🙂 ). To sum up a little bit, after more than half an hour of cleaning, we were so exhausted that we decided to sleep in the street where we were. We didn’t feel like looking for somewhere else. 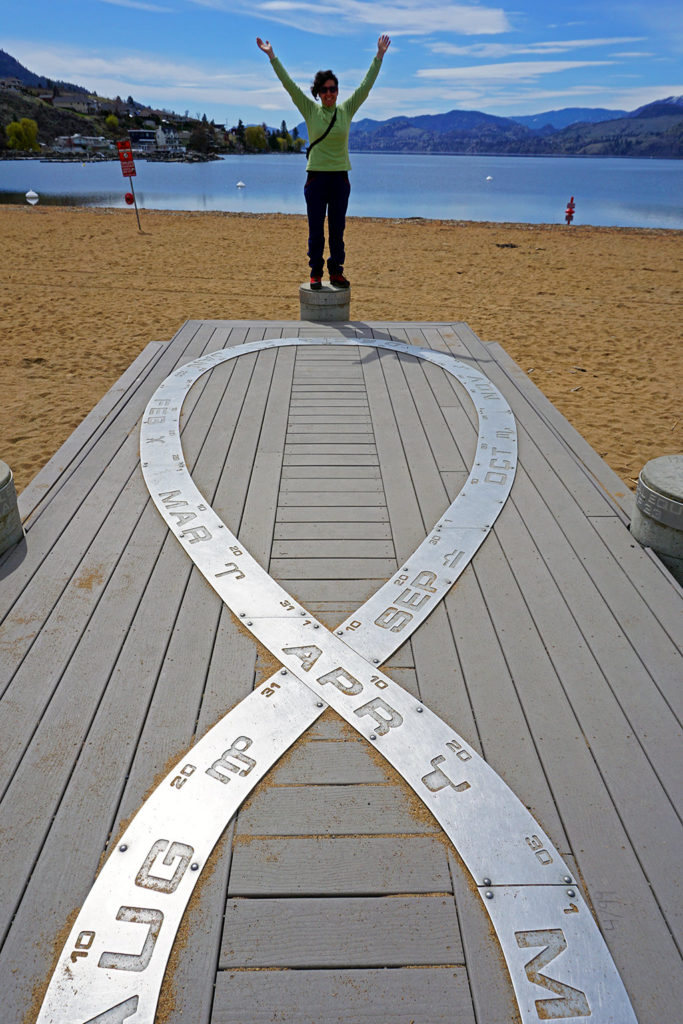 On our way to Penticton we already realized that the road between it and Kelowna is really beautiful. So we decided to have breakfast and drove to Kelowna. This time we wanted to enjoy the drive and stop somewhere along the way to admire it. Anything we can write will not be enough to describe it. The road goes along the shore. You have the mountains in one side and in the other side you have the see and the mountains behind it. In addition, the maximum speed allowed is quite low, so both of us could enjoy it while driving. We stopped also to admire it better and try to take some pictures in order to show you how beautiful it is. Do not miss it if you are around, it will only take you around 1 hour to go through it. It was one of our favorite experiences of BC with the car.

In Kelowna we discovered the Myra-Bellevue Provincial Park. We spent more time in the natural park than visiting Kelowna itself. You can find more information about our experiences in this provincial Park in this article: Myra-Bellevue, Nature fights back! 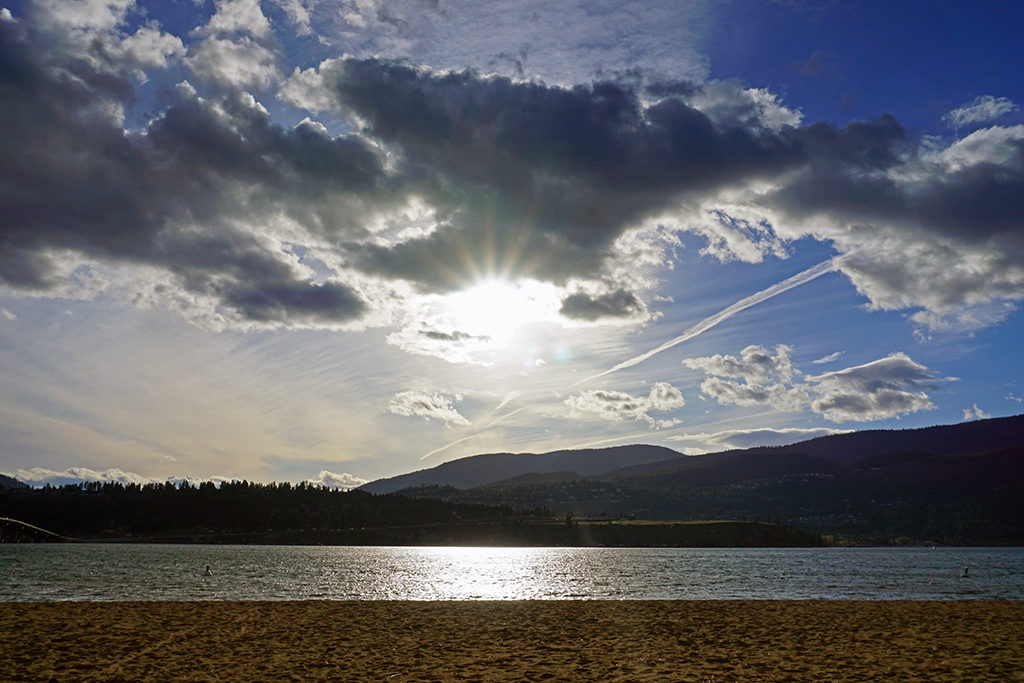 After our visit from different areas from the Myra-bellevue Provincial Park, we decided to drove our way to Banff and reach the next destination in our list, the rockies. We had a look at the prices for gas in Kelowna and that day were quite expensive, so we decided to tank in the next gas station on the way to Banff. In Canada you normally see a transit sign indicating that you should look at your gas level because the next gas station is quite far. They usually write down how many Km away. Unfortunately, we did not see any sign and we were not worried because we though, you know, that it will be like in Europe were you will not have to drive more than 100km in the Highway to find a gas station.

But at some point we started to realize that this maybe was not going to happen. So we were down to reserve tank… and yes, we start to panic and think about how many possibilities we had and how we could manage any situation. We decided to go on and try our luck until the first gas station… And we manage it! And…the price was as high as Kelowna! Hahaha I don’t know if tthere is any moral in this experience, but we never let us scare again for high prices. We just do not fill up the whole tank with gas, just enough not to worry about gas and wait for a cheaper day or place to fill up the gas tank. I must say, now is funny when we think about it and how many possibilities we were able to think about in order to solve the problem. But also relieved that we did not have to use any of them 🙂 So if you are going to drive through a mountain area just make sure you have enough gas to make it or full your tank before you go. 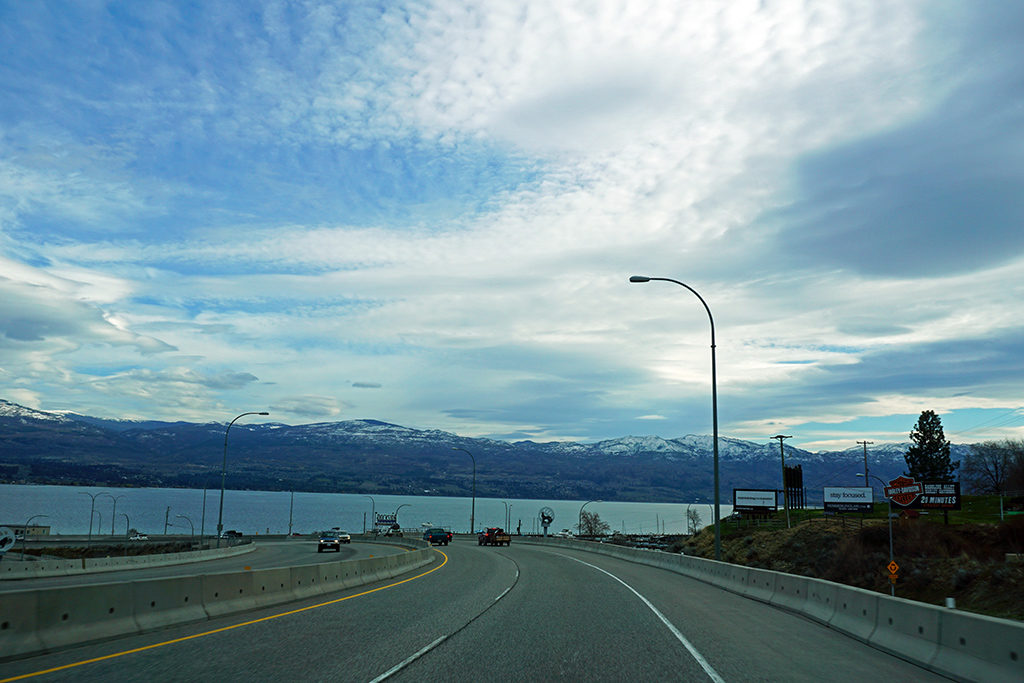 We think is one of the most famous cities of the Rocky Mountains in Alberta. We have to admit, we understand totally why it is so famous. When you arrive there you will see yourself surrounded just by mountains everywhere. We where there in the low season and that allowed us to be able to avoid staying in a campings. But if you are planing to go there in the summer (peak season starts at the end of Mai), be prepared to pay a camping place there and, even better, reserve one in advance.

The town is as beautiful as crowded with tourists. There is a lot of hiking that you can do from Banff directly. Everything there is more expensive than any other place. And you will see big groups of tourist shopping or just walking around. Most of the people who are shopping there doesn’t go for a hike or skiing. So don’t be afraid about that. You will find beautiful places around Banff which are perfect to go hiking. You can also go skiing, but we don’t know when is the time of the year to do it there, sorry. 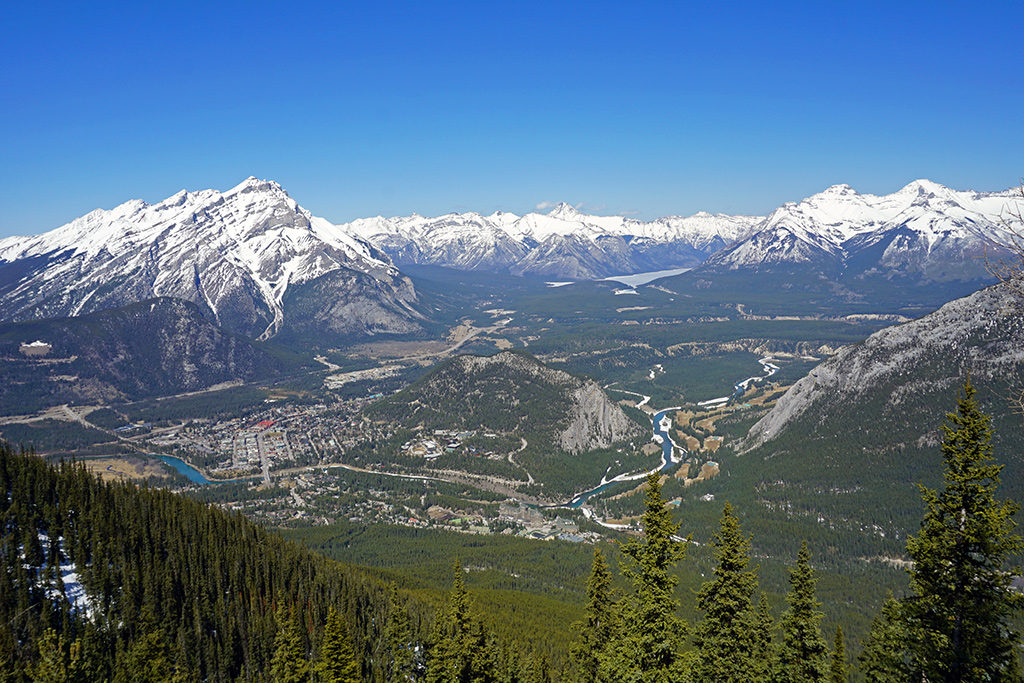 After the last day of hiking in Banff we decided to drive until Canmore and spent the night there. Canmore is also a small town but more calm than Banff and with less tourists, which is more our style. The town is nice and the surroundings seem also pretty cool. Unfortunately, we didn’t have enough time to go hiking there. We were starving after the whole day hiking, so we decided to go out for dinner. Something that we tried to avoid as much as we could while traveling with the RV. We went to a brewery and order beer and burgers. The perfect dinner after hard hiking! 🙂

When we got the burgers we had a surprise: they were in lye roll! We eat the bread a lot in Germany but we have not seen it used as a bread for burgers before. Our opinion: It is a perfect combination! We loved it! It was far the best burger we ate for a long time. (and a little spoiler alert: after traveling through the USA we decided it was the best burger we ate the whole way in Canada and USA!). We did not have the time for it, but in Canmore they have a pretty awesome climbing hall. So if you like some climbing, you are in the perfect place 🙂 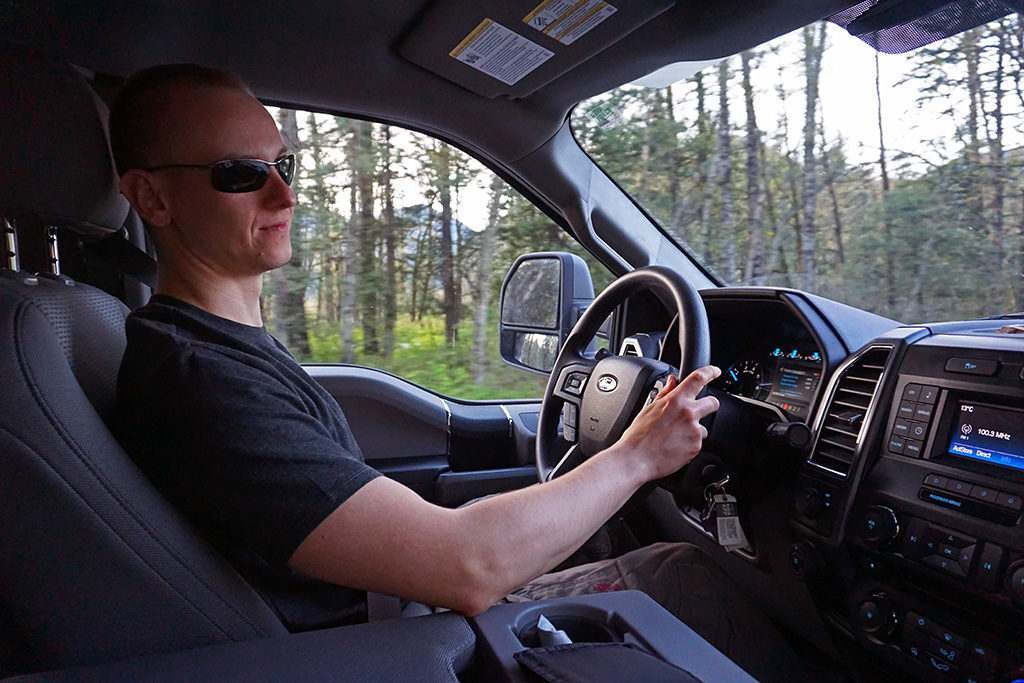 Resting and BBQ with friends: Nelson

The best part of hostels and couchsurfing is that you can meet new people easily. We met a couple from Barcelona during the first days in the hostel in Vancouver.. Both of us were traveling with an RV and we decided to meet in Nelson. We had BBQ and some beers and a campfire at the lake. It was amazing to be more than the two of us 24/7 and to exchange experiences and food. Until this day we were everyday pushing us to do something and got the most out of having an RV. We enjoyed some time just drinking coffee with more people and forgetting a little bit about sightseeing. We just enjoyed a little bit more being in the RV. It was so nice and it felt so good, that we decided to stay two days in Nelson with them. We couldn’t stay longer, we needed to give our RV back on 3. Mai without delay if we didn’t want to pay extra charges. 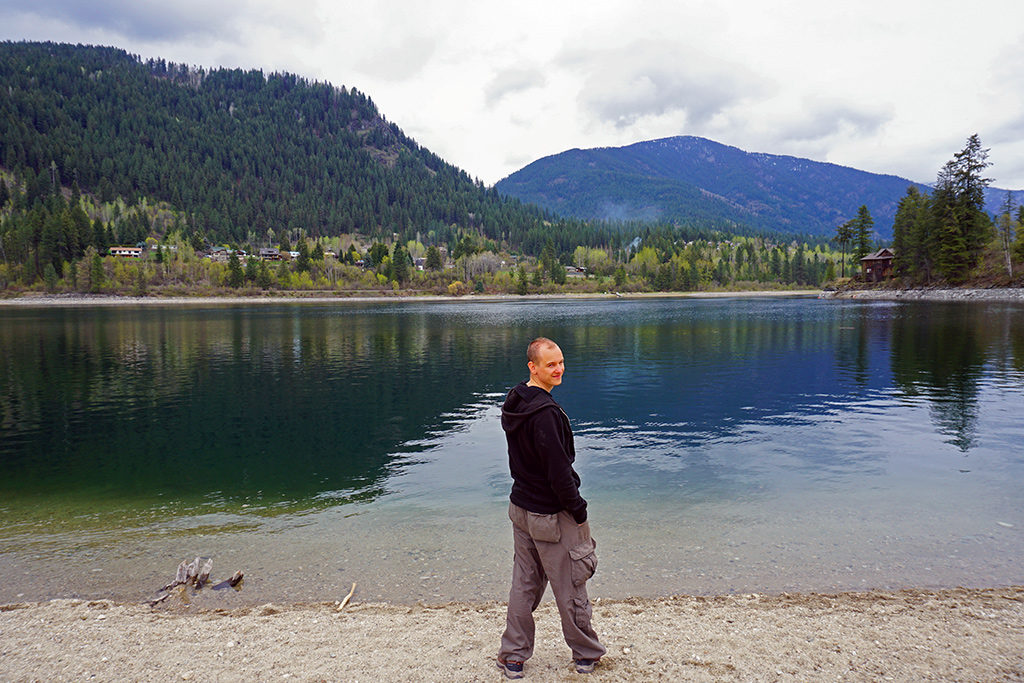 How to get woke up by the police

We wanted to clean a little bit the RV before giving it back (in order to avoid any extra costs). We though it wouldn’t take much time, and actually the cleaning itself was pretty fast. But, we had a hard time finding somewhere to dump the gray and the black water. We though it would be easier. Normally, there is a dumping station in every city and almost every camping has one you can use. But in the city we were we couldn’t find any dump station. We spend almost 3 hours looking for a place to dump. At the end we found a camping where we could do it! Everything took longer than we thought and we decided to stay there for the night and find some place for free.

So, we drove a little bit around and we found quickly a parking lot which had no sing with “no camping or overnight”. We were surprised to find somewhere so easily. It was really close from the road we needed to take the next day to go to Vancouver. We were really happy and could almost not believe that it had been so easy. Around 7:30 in the morning someone knock on the door. Geda woke up, put on a sweater and opened the door. The police was there. We were parked in the parking from the police academy. I could not believe what the police officers were saying! I apologized and let them know that we didn’t see any information about that. If we had, we would definitively not have parked there. The police officer admitted, that they need to spend more money in order to make more visible to the people, that it belongs to the police academy. And so started our last day with the RV. Fortunately, it was our last encounter with the police! 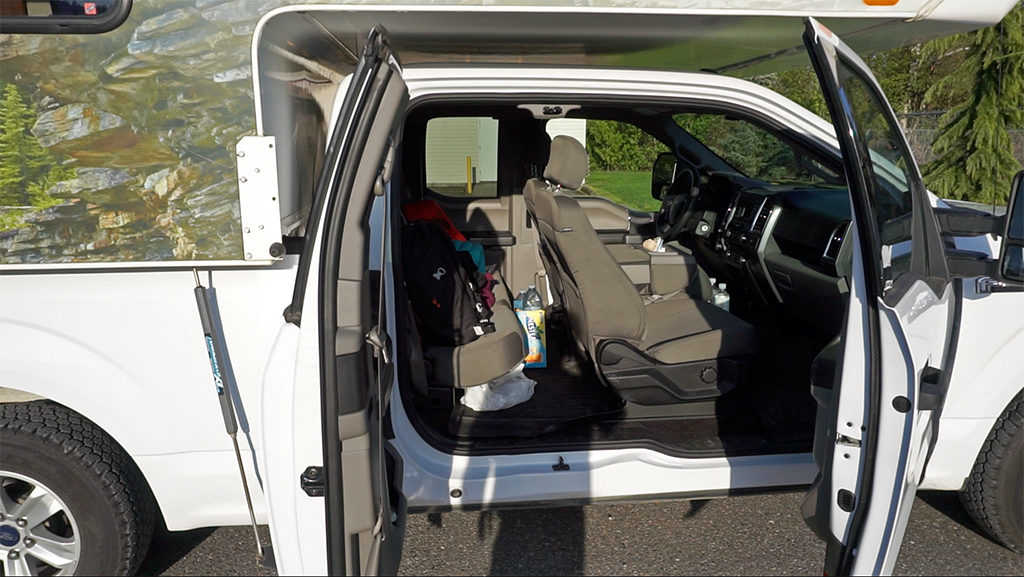